It was time to take my Dad with me again. Why? Because I was invited for a beer tasting at Hop & Co! And beer calls for Dad as my sidekick 😉

Hop & Co is the company of two super nice people. They’re so sweet and completely commited to their beers. And they have lots of it! 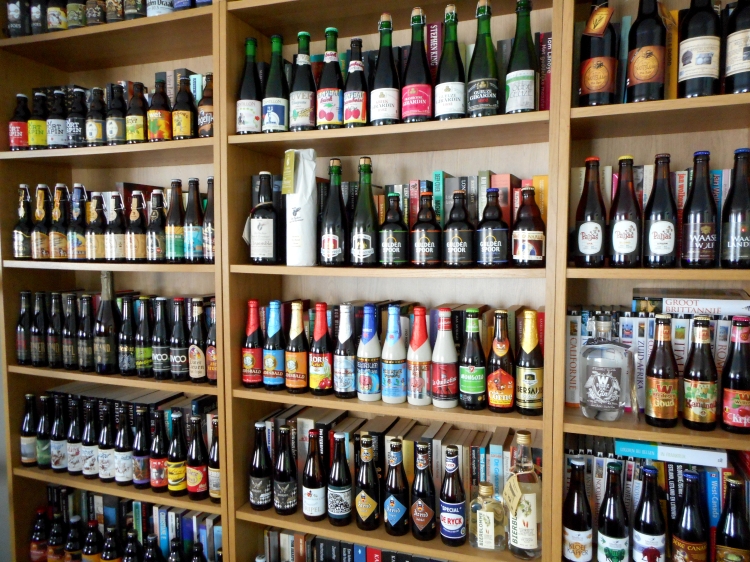 Nope, that’s not even the whole collection because my frame was too small to fit everything :p 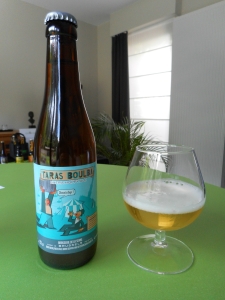 The name for this beer came from an old tale. Brewery De Zenne translated that story to the situation in Belgium, between the Flemish and the Walloon. There was a Flemish father who went to battle against Walonia with his two sons. One of his sons was in love with a Walloon girl. He helped here during this battle. The father found out about it and killed the son. This tale is also shown on the label of the beer. We see the furious father with a can of beer, ready to throw it at his son.

This blond beer has a very strong hop taste with a little hint of grapefruit. It has 4,5% alcohol. 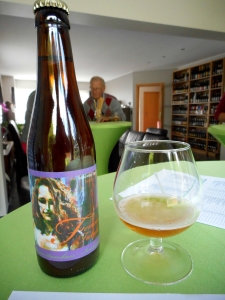 This blond lady is part of a whole family:
Femme Fatale married Bon Homme. After a few years they had a baby: Enfant Terrible. There is of course a grandma, Ma mere speciale. There was a young lady, looking to stir things up: Cuvée Mam’Zelle. Luckily there was Cuvée Jeun’Homme who came and won the young ladies’ heart.Every community has its nun: Cuvée Soeur’Ise. Fils a Papa is the youngest son of the family. The latest addition to the family is Merci Maman. This beer was brewed dedicated to the women who helped during the first world war. The brewery gives 10% of their sales to projects who support women who are still in that position such as the women in Iraq.

Femme Fatale is a beer with 6,5% alcohol. It’s still a beer with a lot of hop but the hop is softened with a touch of lemon. 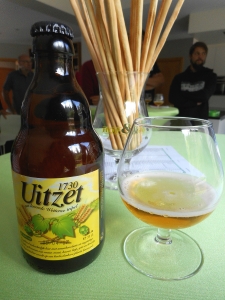 This blond beer with 6,8% alcohol is a lot less hop-isch than the other two. It still has a little bit of hop in it, but it’s more subtile. It has the freshness of fruit in it.

The legend of its name comes from a fire. There was a fire going on in the brewery. The villagers came to warn the brewer but he told them not to put out the fire but to take care of the beers first. In Dutch: uitzetten => uitzet 🙂 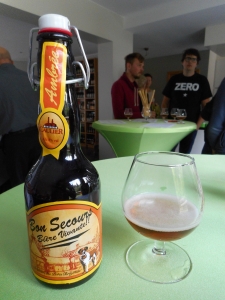 The brewery didn’t love the cap that much a while ago… There was a problem with the cap and the brewery had to take all of his beer out of sale! The brewery was almost bankrupt by this incident but they survived 🙂 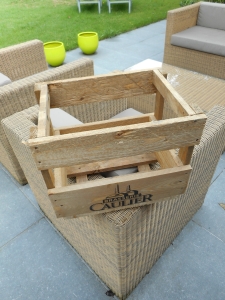 The beer has 8% alcohol. It has its special taste from the different caramelized malts and the refermentation in the bottle. This beer is not for everyone, given that special malt taste. 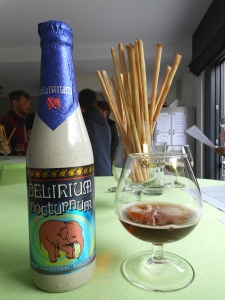 This brown beer with 8,5% alcohol has some chocolate in it! The beer has caramel, chocolate and mokka in it. First you get that caramel, then comes the mokka and the dark chocolate is the last taste you’ll get. It has that typical dark chocolate stickyness to your palate. 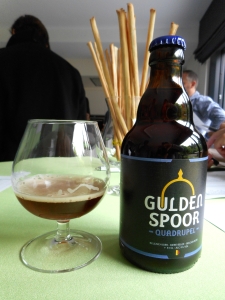 This brown beer was our last one and has the highest alcohol percentage: 9%. It has exotic fruts in its aroma.

We also had the opportunity to try some other beers they had in stock. My dad left the choice to me. Sooooo I picked the one with the most beautiful label of them all… 😉 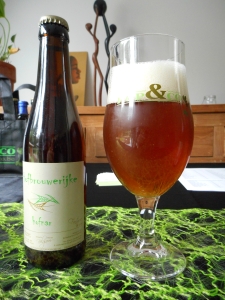 I have no history about this one but it was the best beer I’ve tasted that day 🙂 Great choice, Sarah! This amber colored beer has a bitter taste because of the whiskey malt that was used. But I think the bitterness was very well balanced 🙂
My dad loved it too. It seems we have quite a similar taste in beers… :p Oh well, what can I say? The apple doesn’t fall far from the tree?

My Dad and I really enjoyed ourselves at Hop & Co. We’ve tasted some great beers and my Dad bought some beer as well 🙂 Hofnar and Uitzet really were our favorites! I didn’t like that Bon Sécours Ambrée that much and I know it’s because of that caramelized malt. I can’t tell you what beer you should try because every taste is different and there were people who absolutely loved that Bon Sécours Ambrée and disliked the ones I favorited. My one piece of advice is this: if you’re somewhere new and they have regional beers, do taste them! You never know what liquid pearls you’ll find 🙂

Hop & Co doesn’t only sell beer, they also make awesome gift packages with beer 🙂 I would recommend them to everyone living in the area of Antwerp, Belgium. I’m sorry my dear foreign readers, they don’t ship 😦