Today is the 21st of July! It is the National Holiday of Belgium.
I wasn’t all that festive last year with this Summer Pasta, but this year I go all caloribombing all over again!
Woohoo!

The National Holiday of Belgium… What better way to celebrate than with a Flag Cake!
I’ve seen some beautiful Flag Cakes for the 4th of July and I thought Belgium deserved the same 🙂 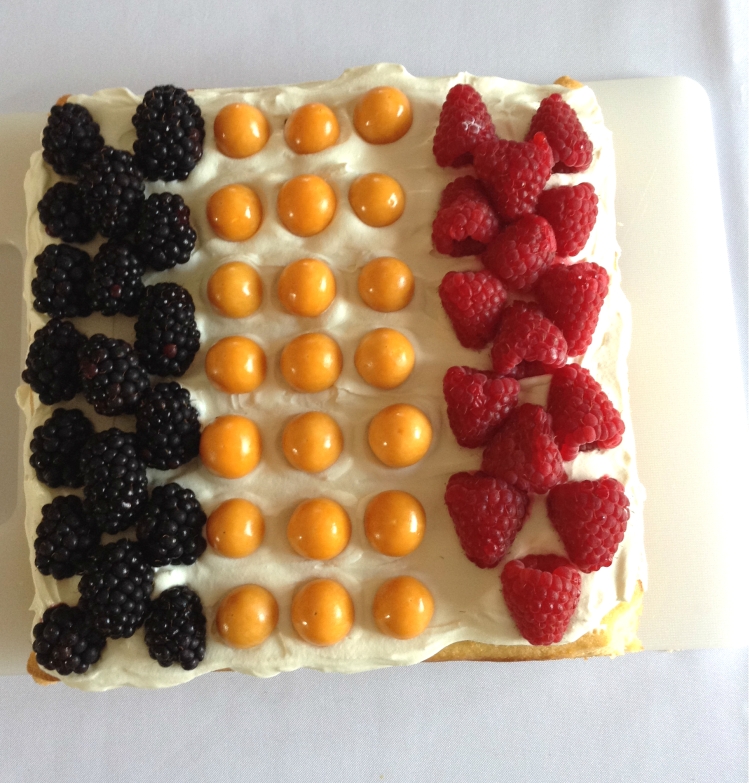 Want some history about our National Holiday?
Wikipedia says it so well:

In 1830, drawing inspiration from the recent July Revolution in France, the southern provinces of the United Netherlands rebelled against Dutch rule after a period of growing economic and religious disparity and political alienation. The Dutch were forced out of much of the area and Belgium gained independence. A National Congress was created to write a Constitution for the new state.

The Congress decided that the new country would be a constitutional monarchy (associated with political stability) rather than a republic, in order to reassure foreign governments and the Belgian middle class who associated republicanism with “mob rule” in the aftermath of the French Revolution of 1789. The Congress called upon Leopold of Saxe-Cobourg-Gotha, a German nobleman, to be the first King of the Belgians on 4 June 1831.

Accepting the invitation, Leopold was crowned King. In the ceremony, Leopold vowed to accept the Constitution drawn up by the National Congress, officially bringing it into force. The 21 July 1831, is therefore a date commonly used by historians to denote the end of the Belgian Revolution and the start of the Kingdom of Belgium. 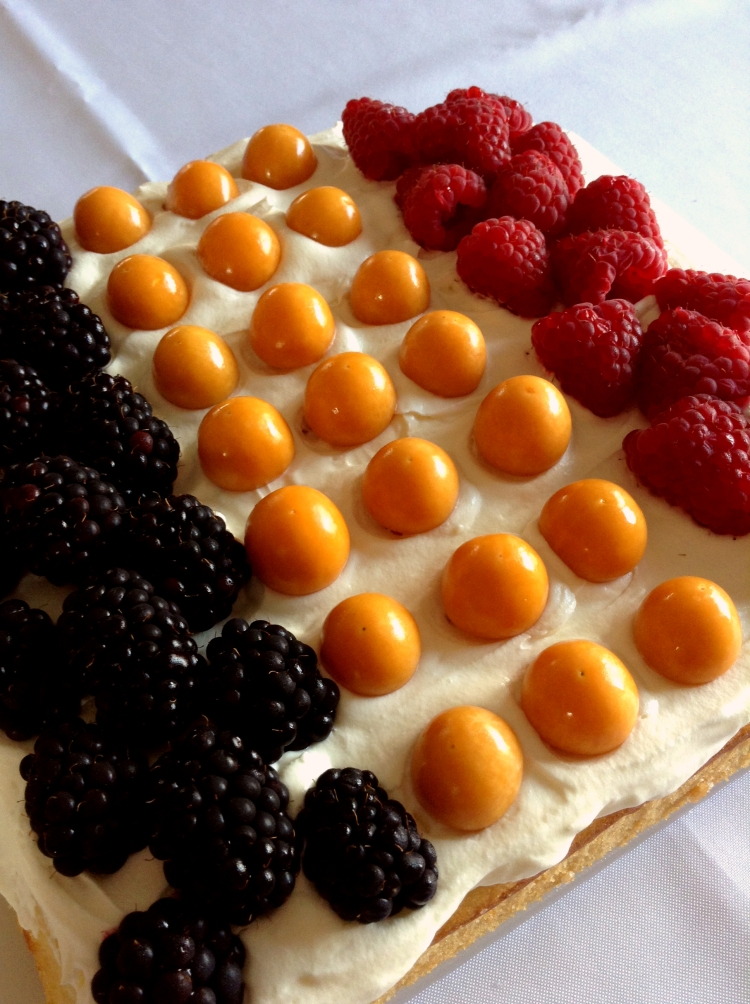 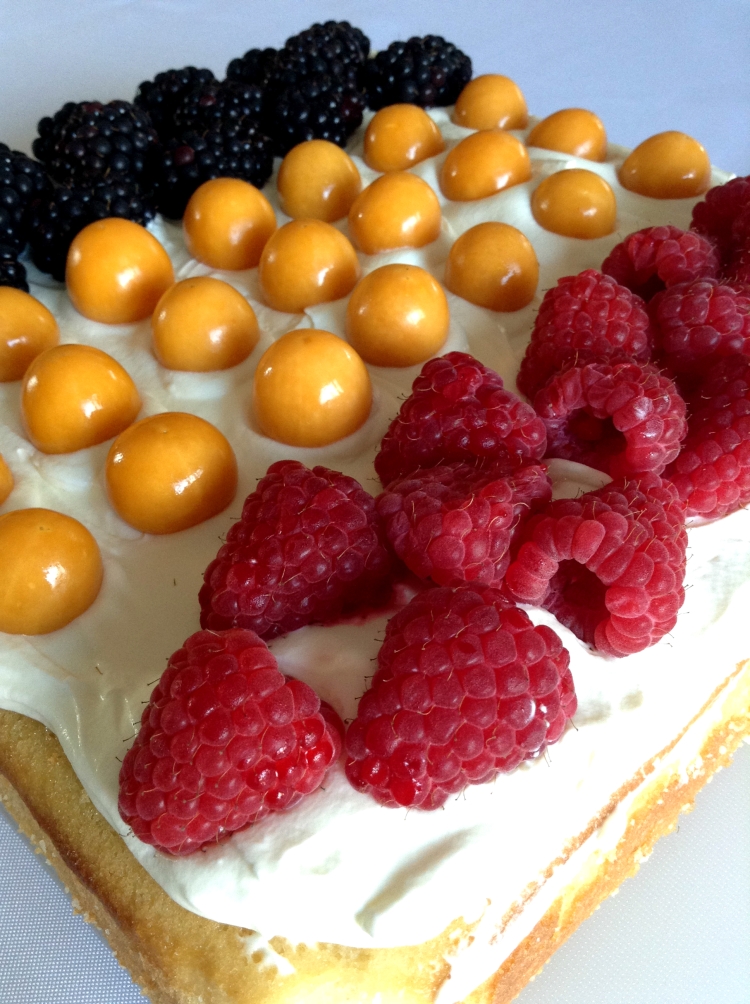 What do we need: 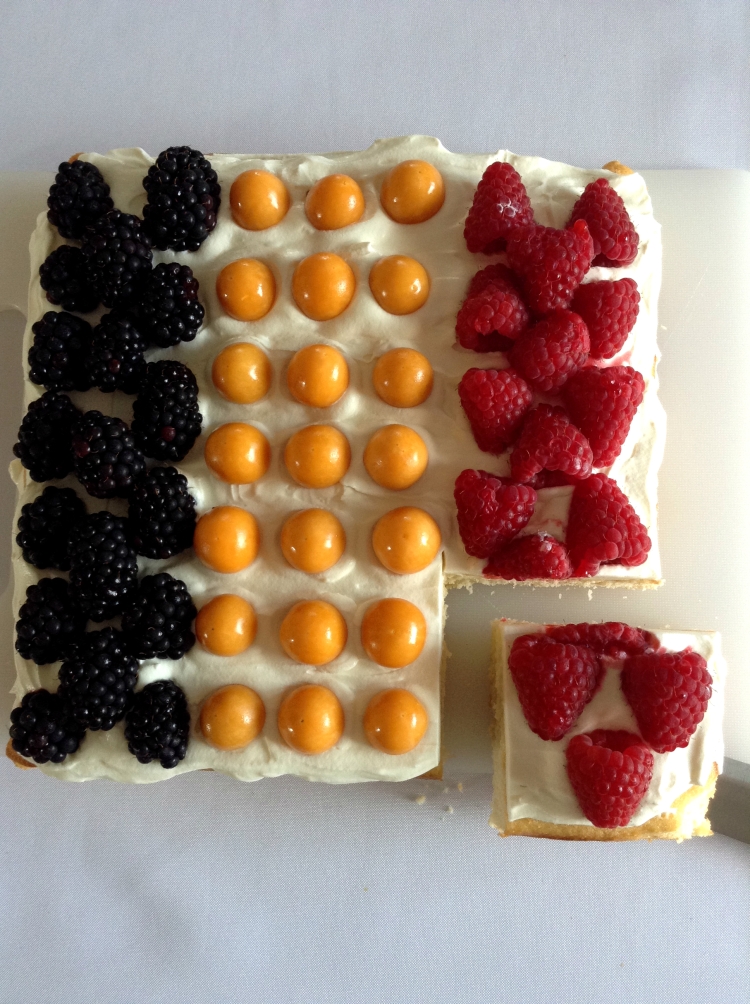 Preheat the oven at 180 degrees centigrade.
Place some baking paper in your baking tin.

Mix together the butter and the sugar (both kinds) until it becomes a smooth mixture.
Add the eggs.
Put the flour and the salt in it and mix well together.

Pour in the milk and the lemon juice.

Mix it all together until the batter is perfectly smooth.

Bake for about 30 minutes.
Let it cool a bit in the oven, then on a rack.
You can remove it from the baking tin if it’s almost completely cold.

Meanwhile we can make the topping.

Beat the cream. Add the cream cheese and the powder sugar.
Beat it until it’s completely whipped.

Put the topping on the cake. You can have it anyway you like it: Thick, thin, wavy, smooth, …
Add the fruit in the shape of the Belgian Flag and you’re done!

Call your friends and family and celebrate this joyfull day!
Or you can bring it to your neighbours, they won’t complain 😉 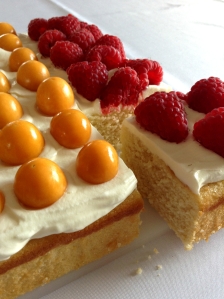 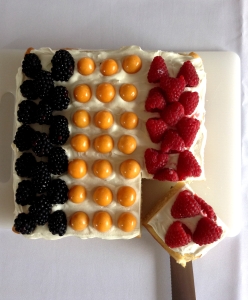 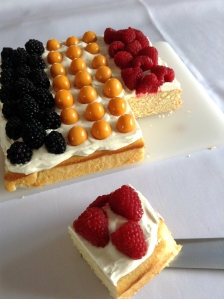 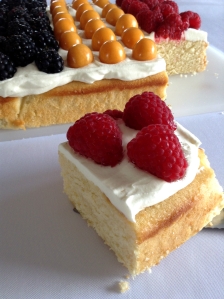